In recent decades there have been a number of important stimuli for tree planting, including the loss of hedgerow elms to disease, the millennium and, perhaps most dramatically, the estimated 15 million trees uprooted during the storm of 16 October 1987.

Native tree species blend in most effectively into the rural landscape. However, the most common tree in Britain is Sitka spruce (Picea sitchensis) making up 28% of our tree cover, with oak (Quercus spp.) only 9%.

It takes a long time to get the mature treescapes that we enjoy today. Some are natural. But many were planned and planted generations ago. Working with trees is a long-term project and must involve careful planning and aftercare if the results are to be enjoyed in 10, 50 or even 100 years time.

Why we should plant trees

Most British flora and fauna evolved in the wildwood and remain dependent on trees, shrubs and their associated clearings and glades. Some native trees support a wide diversity and biomass of wildlife – the oak, for example, supports about 240 different moths and butterflies. A mature tree can produce 50,000 acorns in one year, feeding birds, including jays and wood pigeons.

Other species of tree are the sole food source for local fauna – the brimstone butterfly larvae only feeds on purging buckthorn (Rhamnus cathartica) and alder buckthorn (Frangula alnus).

Planting native tree and shrub species in groups to form woods and thickets will not replicate natural woods for centuries, but will ensure a good start for colonisation by native wildlife.

Botanical historians and nature conservationists argue strongly for only planting species within their natural range and not to indiscriminately plant rarities such as the native black poplar. In important conservation areas, if trees have to be planted they should have been grown from seed collected on site (local provenance).

If open land is protected from grazing it will revert eventually, through natural succession, to a ‘climax woodland’. In ancient woodland and on nature reserves it may be much more appropriate to protect and nurture self sown seedlings, rather than plant and introduce genetic strains of the same species from further afield.

However, well-managed deciduous woods in lowland Britain could help meet the need for hardwood. They can produce five to 10 cubic metres per hectare per year. 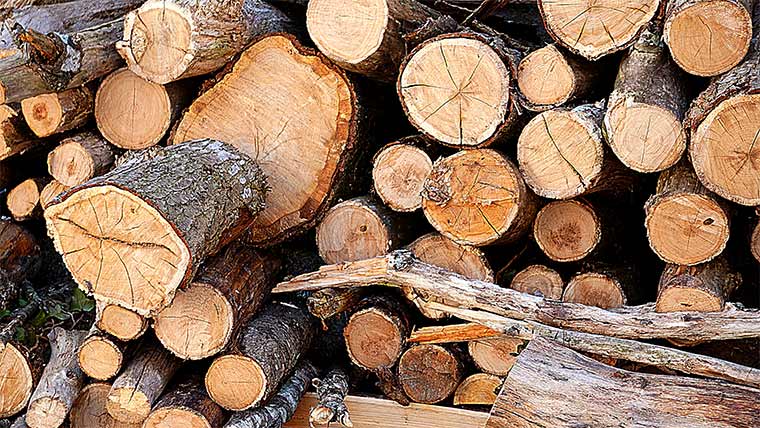 Planting schemes can try to replicate native woodland habitats, but in a built environment it can also be good to take advantage of the diversity of beautiful trees introduced from around the world. Plantings in urban areas focus on the beneficial effect trees have on the climate and their surroundings, as well as benefits to native wildlife.

To reduce the effects of climate change

The burning of fossil fuels and the destruction of tropical rainforests and peat bogs, which act as carbon sinks, has released more carbon dioxide into the atmosphere, causing the world to warm.

Trees need carbon dioxide to grow and during photosynthesis give off oxygen. The foliage of a single mature beech tree (70-100 years old) consumes enough carbon dioxide to fill 800 homes in a year and meets the daily oxygen requirement of 10 people. If that tree was felled 2,700 young saplings would be needed for the same results.

Trees also absorb moisture. A mature beech can transpire up to 100 gallons of water a day. Trees planted in belts around and within built up areas can cool the air and control temperature extremes. In Frankfurt – a city surrounded by a green area 50-100 metres wide – the air temperature is lowered by 3.5 degrees Celsius on a hot sunny day, the equivalent of climbing a 700 metre-high hill.

Tree shelterbelts can measurably reduce air pollutants such as sulphur dioxide and lead from industrial and car emissions. Dust is filtered from the atmosphere, becoming trapped on leaves and then washed down by rain. A street without trees can have four times the amount of dust compared with a tree-lined street. One hectare of beech forest can collect anything between four and 68 tonnes of dust each year. Belts of trees and hedges have been planted as windbreaks on farmland for centuries. Only 140 metres of shelter some nine metres deep will protect from six to eight acres in its lee downwind and between one to two acres of land upwind.

Around buildings the right trees in the right places can lead to savings of up to 25% on the winter fuel bill.

The top few inches of soil are the most productive. This is enriched by plant litter from trees. Shelter from tree leaves and the binding action of tree roots help to prevent rain from washing soil away to pollute lakes and rivers. In woods about 85% of rainwater is absorbed, to be released gradually over time.

Persistent urban noise reduces the quality of life, but trees and other vegetation can help diffuse it. The foliage of trees is flexible and soft and so absorbs sound, whilst their branches and trunks deflect it. A woodland 30 metres wide will reduce noise by 21 decibels – an appreciable amount.

In community woods the emphasis is on green spaces for public access for recreation. They include paths and involve local users in the planning and planting process. Trees play an important part in the fabric of parks and open spaces where people can relax from the stresses of modern life.

A history of tree loss

Tree cover has been declining over a very long time; in fact since clearances for agriculture were started by neolithic man about 6,000 years ago. The original total forest cover had probably halved by the Iron Age (800BC-100AD) and been reduced to 15% by the time the Domesday Book was written in 1086.

Woodlands were very important in the local economy and through coppicing provided brush, poles and timber for firewood, fencing and building needs.

As traditional uses and markets for wood began to decline so did woodland cover. Since 1947, mainly due to mechanisation and intensification of farming methods, 45% of the remaining ancient woodland has disappeared.

By the turn of the century the UK’s woodland cover was 5% – the lowest in Europe. The increase to a cover of 13% (2011 – The State of the UK’s Forests, Woods and Trees: Perspectives from the sector by The Woodland Trust) has been mainly due to plantations or conifer forestry.

TCV has long been a champion of large tree planting projects. We launched a campaign to plant a million trees in the early 1990s. The Millennium Tree Campaign in Northern Ireland planted over 1.5 million trees by 2001. More recently, I Dig Trees has planted over 400,000 trees in two years.

National Tree Week, running since 1975, regularly results in many thousands of new trees being planted.

The main findings from Forestry Statistics published by The Forestry Commission are: