Sand dune systems occur on the coast throughout the UK and Ireland. They support a diverse range of flora and fauna.

Although inherently unstable to start with, once vegetation is established they are often protected from change by low-intensity grazing of cattle, sheep and rabbits.

Changes can occur naturally, for example in violent storms, but the fragile dune ecosystem is most at risk from changing agricultural methods and man-made pressures such as the building of golf courses and increased tourism.

Dunes are often home to rare wildlife, which is easily disturbed and unable to relocate to another type of habitat.

Sand dunes are formed where a large area of sand is exposed at low tide. The sand dries in the sun and wind blows it on-shore where it is trapped by vegetation. The dune system grows as fresh sand is trapped on the dunes nearest the beach. The habitat becomes progressively more stable away from the shore.

Large, multiple-ridge dune systems are formed on the west coast by the prevailing westerly winds. Examples of these are Braunton Burrows in north Devon, Whiteford on the Gower Peninsula and Formby and Ainsdale on Merseyside.

On the east coast, narrow systems form where the dune building easterly winds are balanced by the prevailing south westerlies such as at Druridge Bay in Northumberland. 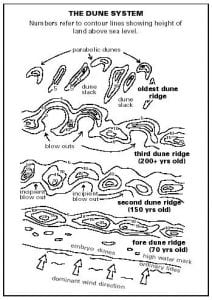 Threats to sand dunes – the facts

Current thinking on dune management favours ‘dune mobility’ rather than restricting the movement of sand. Trampling by holidaymakers taking shortcuts to the sea, horse riding and vehicles all erode the thin crust of vegetation, exposing the sand underneath to the wind. Unchecked this can lead to ‘blow-outs’ and may result in the loss of large areas of sand dune. Sand trap fences are constructed to tackle this problem and when sand has gathered it can be stabilised by planting marram grass.

Light trampling, however, can be beneficial and bare sand is an important habitat within the dune ecosystem. This dynamic approach does not try to go against the natural succession that occurs from the foredunes to the fixed dunes, but tries to protect the dune-forming processes. Today’s blow-out can be tomorrow’s dune slack.

In the early stages, dunes are deficient in water and plant nutrients. Only specialist dune-building plants, such as sand couch, lyme grass and marram can survive – they are called yellow dunes. As the sand becomes more stable, mosses and lichens colonise the bare ground and they become grey dunes.

As more soil water and nutrients become available marram grass is succeeded by a more diverse flora. With grazing and rabbit nibbling a species-rich calcareous grassland can develop because of calcareous sea shell fragments in the sand. In the wetter valleys or slacks behind the established dunes, marsh helleborine, wintergreen and creeping willow are common. Silica sand develops an acidic soil and lowland heath species such as heathers and ling dominate.

Coastal dunes are better suited to warmth-loving invertebrates than any other habitat in the UK. Mobile sand ensures an ample supply of open vegetation and bare ground. Sloping ground provides sunny, south-facing slopes, shelter and variety, and free-draining sand dries and warms quickly in fine weather. Dune pools which periodically dry out support specialised invertebrates. Deepening of such pools to make them permanent can have disastrous results.

Scrub on the margins of the dune system can provide resting and feeding areas for migratory birds in the autumn and spring. Nesting colonies of sandwich, common and Arctic terns are found, particularly where there are bare expanses of unstable sand. The Machair dunes of western Scotland are rich in breeding waders such as lapwing, dunlin, redshank and ringed plover. 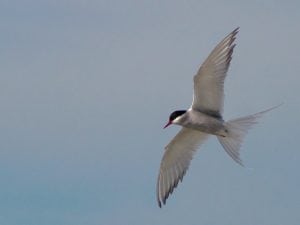 The rare natterjack toad lives on dune systems. The combination of open water slacks, with shallow margins and nearby sandy areas where it can burrow, is essential for breeding and winter survival. Lowland heaths and dune systems in southern England provide a home for the sand lizard, another rare inhabitant. They have adapted to the unstable habitat and need the subsoil warmth to hatch their eggs.