The network of around 130,000 miles of public rights of way in the UK, is one of the country’s greatest recreational resources. A 1993 survey showed that of 320 million ‘visits’ to the countryside, 120 million visits involved a walk of some sort.

Despite the demand for greater access to the countryside and open spaces, many paths are poorly maintained or neglected. This results in pressure on some of the country’s most scenic landscapes and serious damage to plant and wildlife habitats. At present a third (43,000 miles) of the network is either deliberately blocked or otherwise obstructed.

The network of paths that we can walk today has developed over thousands of years, as the population moved around for hunting, fishing, farming, trade, military campaigns and pilgrimages, as well as recreation.

The earliest footpaths are likely to have been established by herds of animals moving between lowland and upland grazing following the end of the last Ice Age. The people followed the herds for food and water and these routes became established as trackways. The chalk ridgeways such as the Ridgeway across the Berkshire Downs and the Icknield Way near Royston in Hertfordshire, were among the earliest examples.

Excavations for peat on the Somerset Levels revealed causeways made of brushwood and coppiced poles, built in a similar way to that recommended today – the earliest has been dated to 3,000BC.

In Medieval times a system of communal strip fields with outlying commons developed. Unenclosed paths ran between the strips giving access to the common land beyond. In the uplands and moorland areas, where most land was not cultivated, tracks were used for driving animals, to cut peat and bracken, for mining and trade. Many still exist today as their names indicate: Drovers’ Way, Miners Way and Saltway.

In some of the most beautiful areas of the country, particularly honey-pot locations, footpaths may become eroded because of overuse. The 15 National Parks receive over 169 million visitor days a year. The most heavily visited is the South Downs with 39 million visitor days – hardly surprising when you consider that a huge chunk of England’s population live within 60 miles – a day trip away!

Two million people visit Dovedale in the Peak District alone and 750,000 people walk the southern seven miles of the Dovedale footpath annually. The path was upgraded – at a cost of a quarter of a million pounds over a number of years – to cope with the pressure. Although criticised for urbanising the countryside the path allows disabled people and wheelchair-bound groups, the elderly and people with pushchairs to enjoy the countryside.

Paths may be neglected for a number of reasons. Where paths are under-used, there is sometimes a lack of interest in maintaining them and a lack of positive action by the landowner, or highway authority. Where authorities do employ staff and involve volunteers they are sometimes hampered by the extent of resources available to tackle such a big network.

Common features of neglected paths are poor signposting and waymarking, some parts may be impassable because of rampant undergrowth, fallen trees, broken stiles, boggy places caused by bad drainage, fencing, dumping and illegal diversions by landowners and non-reinstatement of paths after agricultural activities such as ploughing and cropping.

Rights of way are the responsibility of landowners and local authorities and there are enormous variations in the attitudes towards the right of people to walk across their land. Many landowners take good care of their paths reasoning that users are more likely to keep to them if they are well maintained and signposted. However to some, a public right of way is an infringement of privacy and an interference to farming, forestry or game as well as a disturbance to wildlife.

In very localised areas, erosion problems have been caused by other users of the countryside, such as mountain bikers, off-road motor cycling, horse riders and four-wheel drive vehicles. Although these users sometimes fuel high-profile disputes that can affect and damage sensitive areas it is not a widespread problem.

A little-used path on hard ground with no stock proof fencing requires little work. However, on most paths, especially those confined and channelled by boundaries, topographical features or vegetation will require practical solutions to overcome problems and are the most common reasons for footpath work.

The simplest solution, with the minimum of disturbance to natural habitats should be found, appropriate to the area, situation and its popularity. 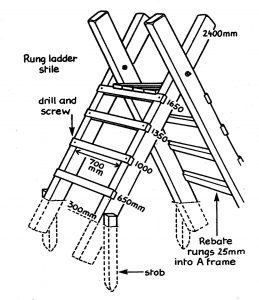 The first long distance path, the Pennine Way was opened in 1965. There are now dozens of paths, totalling thousands of miles. Their success has caused localised, but well publicised problems of erosion on vulnerable surfaces.

The Peak District National Park looks after 40 miles of the southern end of the Pennine Way. The first section has had to be rerouted because of deep erosion of the fragile peat bog of Kinder Scout. The 10,000 walkers annually who attempt the path are joined by local day hikers wanting to get to the top of the mountain. The Park spent a quarter of a million pounds annually on these 40 miles employing a five-person team who work on nothing else. This work is now completed though work continues with maintenance and other upland footpath provision.

As well as repairing paths it is sometimes necessary to build new paths and diversions. Where these are built depends on the soil, drainage, slope, vegetation, habitat and level of use.

Careful thought also has to be given to the psychology of the walker to try and encourage users to keep on the path and away from potential erosion and path widening points.