You are here: Home / Tree Planting & Aftercare / Why plant trees? / The history of woodlands

The history of woodlands in Britain is a history of woodland clearance and management. Historical evidence suggests that there was as little woodland cover in Roman times as there is today. The Romans, invading England in AD43, found a land where agriculture was fully developed, and the river flood-plains and chalklands had long been cleared of the original wildwood. The Romans were an urban and industrial people, and required large quantities of timber for building, and wood for fuel, both for domestic use and for industrial uses such as ironworking. Woodlands were highly managed.

With the retreat of the Roman Empire and the coming of the Dark Ages there was a collapse in industrial activity, communications, and a huge reduction in population. The main effect was in the towns and other settlements, many of which were abandoned. It appears that there was not a great expansion of secondary woodland on abandoned farmland, but that rural activity continued, even if at a reduced level. Woodlands were still vital for the provision of domestic fuel and building materials.

Woodlands were managed mainly by coppicing. Coppicing is a way of harvesting a tree by cutting it down to ground level at regular intervals, at a stage when the growth can easily be cut by hand tools. The cut poles can be used for fuel, building, tools, baskets and many other purposes. The tree regrows from the stump or stool, so that a crop can be taken from a woodland for many years without the need for any replanting. This was in the past, and remains, a very efficient way of producing wood. From an ecological point of view, it means that the rootstock of each stool may be directly related to the trees of the ancient wildwood, giving a link to the genetic stock of thousands of years ago. The woodland soil and ground flora also remains undisturbed, giving continuity with the past, and ensuring the health of the woodland ecosystem for the future. 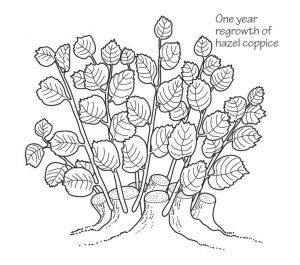 Coppicing has been carried out since Neolithic times. The produce of coppicing was, in the past, far more important than the large timber produced from cutting down mature trees, which was used only for large beams, gateposts, planks and for shipbuilding. The smaller material, called wood, was legally anything less than 2 foot in girth. It was produced from coppicing, and from the branches of trees felled for timber, and was the mainstay of the rural economy.

Pollarding is a similar ancient technique, used to produce a regular supply of wood by cutting the tree back 1.8m (6’) or more above the ground, to produce growth out of the reach of grazing animals. This method of management creates a ‘wood pasture’, with grassland for grazing animals and scattered pollarded trees, and was widely used in the past. It may link back to an ancient ‘savanna’ type vegetation cover in Britain, created by herds of grazing wild animals, and is possibly more ‘natural’ than dense woodland. About one-sixth of the original woodland probably remained at the time of the Domesday Book, in 1086. This woodland remained mainly under traditional coppice management for nearly another thousand years, with only a small decrease in area. From 1945 came a great change. The destruction that took place was not a matter of felling trees which would grow again, as had happened in the past, but mainly of converting ancient woodland sites to other uses. Rackham (1990) estimates that one half of the remaining ancient woodland was converted, mainly to conifer plantations, followed by agriculture. Housing, roads, industry and quarrying accounted for only a small amount. However, afforestation with conifers in some cases merely suppressed the natural woodland, which is now recovering.