You are here: Home / Sand Dunes / A look at sand dunes / Formation and Distribution of Dune Systems

Dunes form where there is an expanse of sand exposed at low tide, the surface of which dries in the sun and wind, so allowing sand to be blown by the wind. The shape and size of the dunes will depend on the volume of sand supply, the wind regime and the profile of the shore.

The immediate sand supply is provided by the beach. Sand is moved from the lower part of the beach by wave action in calm weather, and where the sand dries out between tides, may be blown by the wind.

The most important part of the beach for supplying the dunes is the backshore, the zone above mean high water mark, which is only covered 2-3 days a month by exceptionally high tides or storms. Where dominant sand-moving winds are oblique to the shore, a long narrow backshore may provide as much sand as a shorter broader one (Ranwell and Boar, 1986).

Dunes on the west coast of Britain are formed by the dominant and prevailing on-shore south-westerly winds, and usually form as multiple-ridge systems, with the ridges at right angles to the prevailing wind. Examples of these large systems include Braunton Burrows in North Devon, Whiteford on the Gower Peninsula, Newborough Warren on Anglesey, and Formby and Ainsdale sand dunes, Merseyside.

On the east coast, the dominant dune-building easterlies, blowing over the beach, are balanced by the prevailing south-westerlies. The sand behind the main foredunestabilises rapidly, creating a narrow dune system. These are characteristic of the Northumberland coast, for example at Druridge Bay, and the east coast of Scotland, notably in East Lothian.

Dunes cannot form where the beach backs on cliffs, but only where the shore rises gently. In some places the sand may be blown up over rock outcrops or scree, making ‘climbing dunes’, which are often irregular in form and may have an unusually steep angle of rest. Examples include Penhale, Cornwall, St. Cyrus and Eoligarry on the island of Barra, and at Sandwood Bay and Bettyhill in Sutherland. Where dunes form over adjacent ridges of plateaux they may reach over 91m (300′) O.D., as at Druim Chuibhe, Strathnaver, Sutherland. 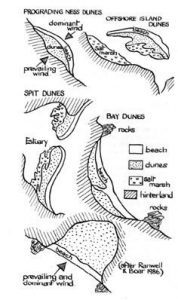 According to their relationship to the shoreline, dune systems can be classified into two main categories, frontshore and hindshore systems (Ranwell, 1972 pp35-9). The frontshore systems project seawards, and are generally prograding ie developing farther along or into the open water. They are more characteristic of sheltered shores, including those where the prevailing and dominant winds are in opposition, as on the east coast of Britain. Features which form include offshore islands, spits and nesses.

Hindshore systems include bay dunes, hindshore dunes with slacks, and hindshore plains, also known as ‘links’, ‘dune pastures’ or, in north-west Scotland where they are characteristic, ‘machairs’. Hindshore systems are progressively more terrestrial in position, although their point of origin is the shoreline itself.

Bay dunes are common on the indented coastline of north and west Scotland, where they often form a narrow strip at the head of the bay with some extension, where conditions allow, onto the land behind. Small bay systems on cliffed coasts are much influenced by the shelter of the surrounding land which greatly modifies winds, causing extensive variations in systems only a few miles apart.

Sand plains or machairs are an extreme type of hindshore system and are much like the fixed pastures of unenclosed hindshore dunes. Machairs are typical of the wet and windy northwest coast of Scotland, covering some 10% of the land area of the Uists for example. They develop under conditions of extreme exposure, where full Atlantic gales sweep the low island and offshore sandbanks free of any dunes which may form, driving the sand inland to create low plains. Machairs are often no more than sm (20′) above sea level, with the water table very close to or at ground level in winter. Their growth is further limited by the universal influence of open-range sheep grazing or the cultivation of the lime-rich sandy soils. At their inner edge, calcareous sand overlies lime-poor moorland peat, producing a very diversified flora.