Throughout most of Britain hedges are trimmed between 3’ (1m) and 5’ (1.5m) high to one of several basic patterns. In earlier days, trimming styles indicated clear regional differences, but the advent of the mechanical hedge cutter has meant a loss of regional styles and skills. In some areas hedges are still trimmed with care and character, for example in the uplands of north Norfolk with its many carefully maintained rectangular hedges, some of which are unusually tall. Powys has some beautifully rounded farm hedges, trimmed so that the snow will slip off. There are other examples, but they stand out as exceptions to the general scene. Beddall (1950) presents a familiar picture when he describes heavily trimmed and close cropped hedges which are clear of growth at the base ‘and then bulge out like a fat woolly sheep on thin legs’.

Cut and laid hedges characterize most of the Midlands, Wales and parts of the North, South and South West (see map here). Unless you inspect a cut and laid hedge before the new season’s growth has fleshed out the bones you may not notice that it has a definite form indicating a regional or local style. The Warwickshire hedge, for example, is quite different from the Welsh Double Brush, and for good reason. each hedging tradition has evolved with one main purpose; to make the best possible stock barrier given the local type of stock and the nature of the hedge growth.

Hedges can be divided into ‘sheep fences’ and ‘bullock fences’. It is not easy to design a hedge that is equally proof against both. Sheep scrabble under a hedge or, if of a tough mountain variety, may jump over it. As one farmer said, ‘what they can see through they’ll go through, even thorn’. Cattle lean over and on the hedge and rub against any stiff projecting branches. Not surprisingly, weak hedges give way. Both sheep and cattle may eat new shoots, particularly thorn, growing from the stools of a laid hedge. Their depredations seem to depend on their mood and perhaps on the state of the pasture. Some farmers don’t worry, but others say that ‘sheep have a poison tooth’ and that new lambs particularly relish a bit of fresh hawthorn or ‘bread and cheese’. Cattle farmers claim that the worst maimers are cattle. All agree that serious grazing can ruin a hedge, sap its vigour and make it very difficult to lay next time. And most will be glad to argue that their local style best solves their own stock problem given the limitations of soil and climate.

Midlands hedges are primarily bullock barriers. Welsh hedges and those laid hedges which occur in the South West are mainly designed to block sheep. Because of this it is easiest to describe hedge laying styles in separate chapters, recognising that there are border areas which show features of both.

During the modernisation and mechanisation of British agriculture during the 1950s and 1960s, the craft of hedge laying was in sharp decline. The traditional full-time farm worker who hedged and ditched in winter was a disappearing breed. Regional styles were in danger of disappearing. The revival since the 1970s means that the variety of hedge laying styles are still practised, although the total length of hedges laid each year will probably never approach the lengths being laid during the pre-mechanisation era of agriculture.

Coppicing may be the oldest form of hedge management, and remains the most widespread after trimming and laying. According to Pollard, Hooper and Moore (1974), most hedges as well as woodlands in the South East and perhaps also the South West were once managed this way. The hedge, allowed to grow and then cut at the base every twelve to fifteen years, provided the farmer with firewood, hurdles, timber, rafters, thatching spars and so on. This regime was integrated with rotational farming in parts of Essex and Suffolk and probably elsewhere. After the hedges were cut the fields were put to the plough for several years but when the hedges grew up again the land was returned to pasture until the next coppicing. LeSueur (1951) adds that, even up to the time of his writing, South Eastern woodlands were occasionally edged with semi- live coppiced hedges created from the woods themselves. Hornbeam was a common species for this:

…the poles are allowed to grow up to about 12’, and are then slashed and laid towards the next stool. If this is carefully done a fairly serviceable live side on the field edge can be maintained for some years, but growth is almost entirely confined to the outside. As the layers all come from stools set at wide intervals there is usually too much wood and too little twig growth in the fence.

Beddall (1950) points out that in the eastern treeless fields, hedges were sometimes allowed to grow 12-15’ (3.6-4.6m) in height. They were kept close-trimmed up to 8-9’ (2.4-2.7m) high and then allowed to overhang, providing shade and shelter for cattle and horses. Like all tall hedges they were hard to keep stockproof, as they tended to grow away at the top and thin out at the base. When this happened they had to be laid and left to regrow.

Shelter hedges are important in certain areas, especially where delicate flowers or fruit are grown.Arigid distinction between shelter hedges and shelterbelts cannot be made, but in general a shelter hedge, no matter how tall, is only one or two rows of trees wide. Thus a hedge seldom exceeds two metres width unless it has been allowed to sprawl. By this standard, the ‘shaws’ or narrow woodland strips which separate many fields in Kent and Sussex are not really hedges. In East Anglia, willow hedges have been planted as a defence against ‘fen blow’. The horticultural districts of south Hampshire, west Sussex and the Wirral have shelter hedges, and in various parts of the country orchards are bordered by hedges up to 12’ (3.6m) high. The hop gardens of Kent, Worcestershire and Herefordshire have very tall, thin hedges for shelter.

Unusual shelter hedges are those of the bulb fields of the Isles of Scilly and parts of Cornwall. Here the weather is mild and sunny but winter gales can ruin the early flowering crop. Introduced shrubs including the evergreen Escallonia and Pittosporum have been planted to form hedges up to 20’ (6m) high. For full effect the fields are tiny, only 60-80’ (18-24m) square, but the space lost to hedges is justified not only by the protection they afford, but also because they allow the slight rise in temperature which causes the bulbs to flower earlier than elsewhere.

Vegetation type distinguishes hedges in several areas. Whether the hedge is mixed or mainly thorn depends on its origin and age, but local planting customs along with climate have sometimes favoured unusual shrubs, such as Fuchsia in the Channel Islands and Tamarisk on the Lizard peninsula. Breckland has its pine shelterbelts, while holly hedges dominate parts of Staffordshire, and beech hedges typify Exmoor. Then there is the famous beech hedge of Meikleour, Perthshire, which is a third of a mile long and 90’ (27m) high!

There remain the turf and stone ‘hedges’ of the South West. The term is variable. In mid and west Cornwall all mounds that are not regular masonry are termed ‘hedges’. On the high moors the ‘hedges’ may be dry stone. Elsewhere the ‘hedges’ are earth banks faced with either stone or turf. However, when Cornishmen or Devonians talk about their hedges they don’t mean whatever may be growing on top, but the banks or walls themselves. Quite often, only grass and herbs find a footing. In others cases shrubs self-seed in, or sometimes an assortment of species may be deliberately planted along the crown or ‘comb’. Usually these plants are left to fend for themselves, although the bank is maintained against the ravages of cattle and lesser pawing or burrowing creatures. In some parts of Devon and Somerset the living hedge is laid, ‘steeped’ or ‘stooped’, rather as it is in parts of Wales.

The County of Cornwall builds its roadside stone hedges to rigid specifications, as shown in the diagram. Farm hedges are frequently higher than this, at 6’ (1.8m) or more where they border a track worn below field level. Whatever the size, they follow the general principle that the width at the base of the hedge should equal the height. The justification for such a large bank even today is that it makes an admirable stock fence and shelter. Land drainage is increased by the ditch dug alongside the bank during construction. 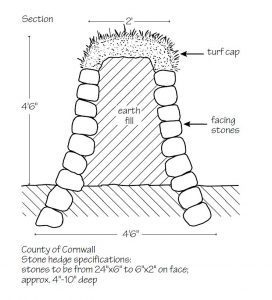 Irish hedges present another etymological roundabout. They are termed not hedges but ‘ditches’, as are dry stone walls, temporary peat baulks and other barriers. Throughout the lowland farming country the earth bank is the commonest ‘ditch’, stone-faced on one side and planted with thorn quicks slipped in among the stones at the base. It is interesting to note that in parts of Wales the bank is likewise known as a ‘ditch’, with the plants growing on top called a hedge. If you clicked on a link and expected TCV's online shop to be here, I'm afraid it closed in March 2016. We're redirecting all traffic to this site now.

Some of the handbooks are still available as books from here

You may print this page for your own use, but you MAY NOT store in a retrieval system, or transmit by any means, electronic, mechanical, photocopying, recording or otherwise, without the prior written permission of The Conservation Volunteers.

Of course, here's the usual message about saving paper and ink - please only print when necessary!