We have lost more than 5,000 miles of dry stone walls in England and Wales since 1947, mainly due to neglect after damage by livestock, dogs and walkers dislodging capping stones, and vibration damage from heavy vehicles. Walls are important habitats, offering food, shelter and nesting sites to a wide range of species. It is also essential to maintain the craft of walling.

Dry stone walls are part of our archaeological heritage – a fact which contributes to their decline. Attractive, weathered stone often ‘disappears’ from roadside sites for garden rockeries. Some landowners, attracted by the high price of weathered stone have sold whole walls for garden centre resale or to building contractors.

Dry stone walling dates back to the Bronze Age. In the village of Skara Brae in the Orkneys, dry stone buildings, at least 4,500-years-old, are still standing with built in dry stone furniture.

The earliest stone walls were often made with large unsorted boulders, moved to clear fields. Built in a crude style, these walls often change direction to take in boulders or avoid streams. They reflect contemporary systems of agriculture – medieval walls show the open field methods practised at the time while later the gradual enclosure of common land into private holdings or crofts, created a patchwork of small irregular shaped fields. These walls often march for miles up and down hills and cross impossibly steep slopes, seen most dramatically in the Lake District.

The gradual loss of skilled dry stone wallers is a real problem. Since the mid 19th Century there has been little need for new wall building, only repairs and realignment. As a result, there are fewer full-time craftsmen. But recent interest in traditional countryside crafts has led to opportunities for volunteers to learn the skills of dry stone walling on training courses or working holidays. The number of professional wallers has also increased. The Dry Stone Walling Association of Great Britain lists professional wallers on its website. 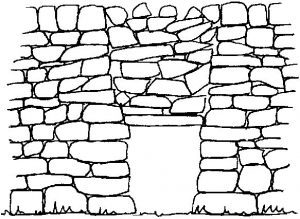 Regional variations have developed over the centuries, influenced by the local stone and terrain. It is important to retain the character of these walls which are preferred by different species. 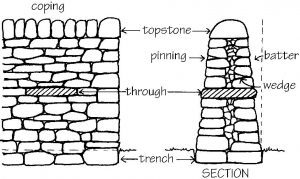 Dry stone walls provide a good picture of the local geology. In the Cotswolds, you’ll find Jurassic limestones while some Derbyshire walls are made with acid gritstone or sandstones. This influences the building and many regional styles have developed. Watch out for buck and doe, alternate large and small upright topstones and cripple holes or smoots, large rectangular holes in the base of a wall to allow sheep to pass through.

The cost of damage

A 1994 survey estimated the total length of dry stone walls in England to be 70,000 miles, of which only 13% were in good condition. The remainder ranged from remnant walls to those showing major signs of deterioration. Only about 50% are stockproof. The situation in the rest of Britain is thought to be similar.

The sooner a wall is repaired after being damaged the better because animals and people enlarge gaps quickly and a derelict wall costs much more to repair than a damaged wall.

The cost of repair and replacement is generally high. A metre of post and wire fencing can cost as little as a tenth the price of a metre of dry stone wall built by a professional waller. The costs rise even more if the wall is remote and if there is no readily available supply of graded stones. But if this cost is viewed over say a minimum life expectancy of 100 years for a dry stone wall then it becomes much more attractive to the landowner. Defra, the Countryside Agency and National Parks all offer grant subsidies for walling.

Dry stone walls are the original ‘green’ field boundaries. Local materials are used and if the wall is damaged the stone can be reused. Walls can be built in areas where trees and hedges do not grow well, where it is too rocky for fence posts to be driven in or where fence posts would quickly rot in the wet climate. If built properly, they can last for generations and require a minimum of maintenance. They also provide much-needed shelter for livestock in the winter and shade in the summer.

Despite their hard and rugged surface, walls are a refuge for a surprisingly wide range of plants and animals. They provide conditions usually found on cliffs and scree slopes in lowland areas and shelter in exposed regions.